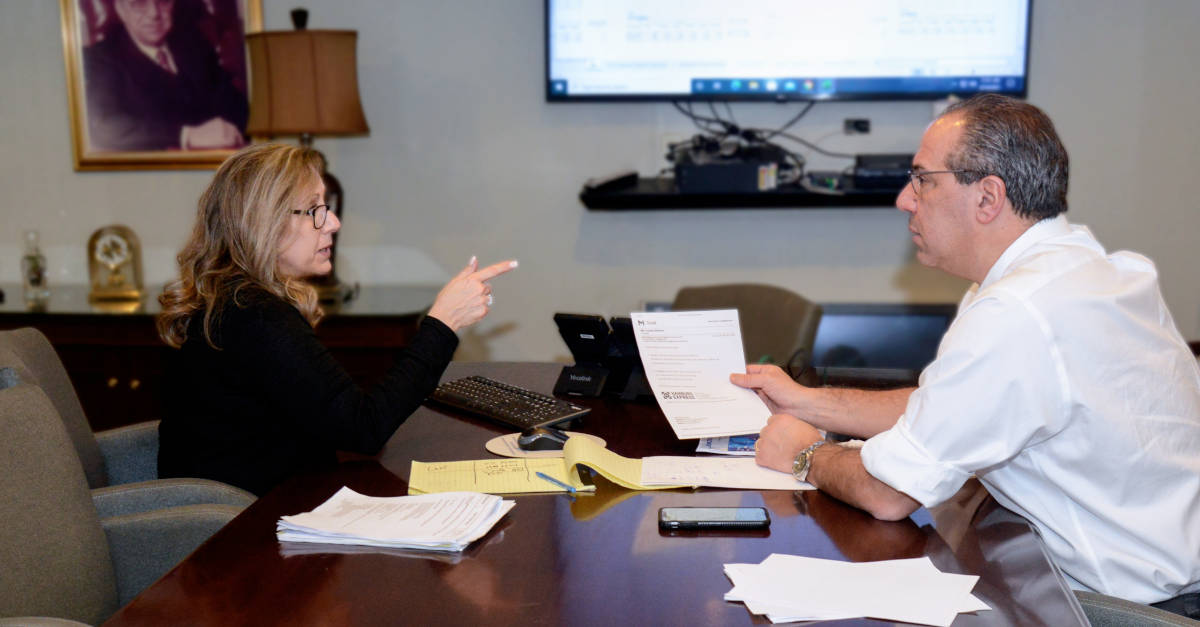 The call came in over the weekend.

A vessel needed a new gear assembly for its engine. The 2600-kilo part was in a remote area of Gujarat, India. The ship would be in Busan, South Korea in one week.

Rosemarie Susino took the call. Recently promoted to executive vice president, she had long been Horizon’s terminal manager at our headquarters near JFK. She knew that getting the gear assembly out of India in a hurry was going to be a challenge.

“The service from India is very slow,” she says. “There are so many customs regulations and a lot of red tape.” The paperwork could easily delay delivery for days, so she and her team started making calls.

From the Supplier to Abu Dhabi

Susino immediately called the supplier in Gujarat to make arrangements while Horizon’s partner in India got to work on clearing the delivery for export.

By Monday morning, the gear assembly was ready for pickup, and Horizon had a truck waiting to load it at the supplier’s facility.

By Tuesday, we had cleared the export through customs and transported it to Sardar Vallabhbhai Patel International Airport, in Ahmedabad, where our partner loaded it on a plane to Abu Dhabi. In Abu Dhabi, we coordinated transfer of the gear assembly to a flight to South Korea.

From Seoul to Busan

“The flight service from India to Busan is horrible,” says Susino, “so we flew it to Incheon,” the international airport serving Seoul.

Flying to Incheon instead of Busan got the gear assembly into South Korea much faster, but its journey wasn’t over yet. Seoul is about 200 miles (325 kilometers) from the Port of Busan, in the opposite corner of the country. So after clearing customs at Incheon on Saturday, we loaded the part onto one of our trucks and headed for Busan, arriving early Sunday morning.

A Stop by the Shop, Then Shipshape and Ready to Sail

Given the marine background of the members on the Horizon team, we know that is not always as simple as delivering an urgent spare part that gets installed as is. Technicians and specialists are often needed to inspect and install large critical Main Engine components, adding to the time it takes for the part to be put into service on the vessel. In this instance our customer needed the gear assembly inspected and prepped at a Busan maintenance shop before it could be installed, so we delivered it directly to the shop.

From there, the technicians took over, preparing the gear assembly then delivering it to the vessel. The ship’s crew soon had it installed and ready to go. They set sail the same day, right on schedule.

For Susino, it was just another week on the job. “For all of our customers,” she says, “we do whatever it takes.”

Do you need help getting your critical spares delivered on time from any vendor worldwide? Call us today at 800-221-6028 or contact us anytime. We’ll do whatever it takes to keep your fleet on schedule.

How to Keep Your Deliveries 99% On Time
Scroll to top George Savich joined Horizon Air Freight as a self-described “Hustler” with a combined education from military high school, an associate’s degree in Surveying, Construction Engineering and Drafting from Alfred University, and his stint as a semi pro soccer player. He began at Horizon in 1987 as a messenger, truck driver, and warehouseman, but has worked as Domestic Manager in our Import Department for the last 23 years.

George’s long years of experience at Horizon have taught him to improvise, adapt, and overcome in order to deliver excellence in every shipment, every day. He is a relentless problem solver who not only believes in but embodies the idea that “Failure is not an option.” His favorite part about working with our clients is providing them with trust and top tier service.

Proudly hailing from Queens, NY, George currently resides there with his wife of 27 years, Anne, and is the proud father of Paul who is a professional musician. George and Anne also share their home with a dog, two cats, and a parrot whom George insists will outlive him.

Ask George how he can help see your shipment through from deck to door at ((email)). Rosemarie is Executive Vice President at Horizon Air Freight — an essential pillar who has served with us in Logistics for her entire career of 38 years. Her decades of service have given her the opportunity to see every department and angle, and she is an invaluable teacher who generously shares the lessons of her extensive experience with others.

About her work, Rosemarie says that finding solutions and delivering results when the circumstances dictate it to be difficult or impossible is one of her favorite parts. She is also adept at discovering new solutions and developing them into services to help our customers succeed in all things logistics. Continually challenging our team and herself to bring added insight and optimized decision making to our customers’ daily logistics requirements, Rose is an invaluable partner who looks to bring a unique value to every customer’s individual needs.

A native resident of Long Island, Rose is a mother of two. Though spare time is hard to come by in Logistics, outside of work she does enjoy music, long beach walks, and hiking — so long as there are no bugs around.

Ask Rosemarie how she can help see your shipment through from deck to door at ((email)). Dave Rector serves as Chief Financial Officer at Horizon Air Freight, where his expertise at developing talent and teams across the organization has already proven to be vital to our success.

Dave’s favorite part of working with our clients is meeting their emergency shipment needs. About his work, he says: “In the Finance and Accounting departments, we aim to provide the same level of service to our internal clients as we do external ones . . . And we throw in a smile for free!”

Originally from Newport, RI, Dave currently resides in Ridgefield, CT with his wife of 26 years, Kim. He is also the proud father of two college-aged children. Outside of work he enjoys travel with the family, golf with his wife, yoga, cycling, and Beer League Hockey.

Ask Dave how he can help see your shipment through from deck to door at ((email)). Vero joined Horizon Air Freight as the previous Executive Manager of Delver Agents, and Founder and General Manager of Sealand Ship Agents and Suppliers. Now serving as Operations Executive at Horizon Air Freight, Vero grew Sealand into the premiere cruise ship agency and supplier based in Ushuaia, Argentina. She excels at creating new services and programs, solving problems, connecting people, and strengthening relationships. Her clients have included some of the most exclusive boutique operators, mainstream cruise lines and expedition cruise companies in the world.

Vero received her Bachelor’s degree in Natural Science & Human Arts, and her advanced technical law degree from Argentinian Catholic University. She also has a licensed degree in International Commerce, and is trained in Environmental Management and the International Ship and Port Facility Security Code.

About her work, Vero says: “My favorite part is being able to learn from our clients, develop and implement solutions, grow our businesses together, and make a difference in their day by giving them the highest level of service and proving our dedication to meet their goals and deliver superior results. I also cherish knowing that the business our clients do with us will make a positive impact in the communities we work in; they will provide jobs and income to our vendors, as well as our staff and all of those that are touched by our operations.”

Vero currently lives in Seattle, WA with her husband and three children: big huggers who love to travel together.

Ask Vero how she can help see your shipment through from deck to door at ((email)). Alex Leondis is Business and Data Analytics Manager at Horizon Air Freight, who uses his background in finance to drive Horizon’s business forward. He continually challenges our team and himself to bring added insight and optimized decision making to our customer daily logistics needs.

Alex’s favorite part of his work is solving the unique questions, challenges and requests from customers utilizing data, while helping them harness the power of information. He thrives when partnering with each client to bring a unique value to their individual needs.

A native New Yorker, Alex is the grandson of Horizon’s founder Anthony Leondis. He’s also a former NCAA soccer player, who still loves the sport as much as ever. Outside of work, he also enjoys traveling both the United States and other countries of the world, and is an avid supporter of charitable endeavors.

Ask Alex how he can help see your shipment through from deck to door at ((email)). Pixie Gibbs is the Export Manager at Horizon Air Freight, and has been dedicated to our customers for over 28 years. Recently she played an essential role in coordinating an urgently-needed spares delivery from Louisiana, Missouri, and Florida to a ship stuck in Panamanian dry dock. She is an expert at continual communication, who truly enjoys interacting with our customers to fully understand beyond their most immediate problems.

Perhaps unsurprisingly, Pixie’s favorite part of her work is moving around the office and warehouse, touching every critical aspect of the shipments she handles. It’s part of what helps her do the absolute best for our customers each day.

A native of Trinidad and Tabago, Pixie currently lives in Queens, NYC. Outside of work, she enjoys running and biking — when she isn’t planning and enjoying family get-togethers. If your birthday’s coming, Pixie is also the one to help celebrate, as those are her favorite.

Ask Pixie how she can help see your shipment through from deck to door at ((email)). James “Jimmy” Gassert is Executive Vice President at Horizon Air Freight, and has spent his 40 year career in our offices. He is deeply dedicated to satisfying and exceeding customer expectations by solving not just the daily — but the difficult.

Jimmy’s favorite part of work is leaving each day knowing that all known issues will be solved, whether that’s at 5:00 PM or 10:00 PM. He is a beloved and dedicated team player, who finds his own success in aiding the success of others.

A native resident of Long Island, Jimmy is an avid music fan of all genres, and serves in the energizing role of our “unofficially official” office DJ. Outside of work, he’s also a classic car enthusiast (his favorite is the 1960’s Lincoln Continental from the 1960’s with the suicide doors), and provides his handyman skills for friends and family.

Ask Jimmy how he can help see your shipment through from deck to door at ((email)). Bridget is Senior Account Manager at Horizon Air Freight, whose 30 years of combined experience in the transportation industry have taught her to treat every shipment as though it is the most important one. She excels at guiding customers through every step of the shipment process, and recently navigated a complicated 125,000 kilo shipment from Japan to South Korea in only 10 days.

About her work, Bridget says her favorite part is getting to learn so much from our customers about their different cultures all over the world.

A native New Yorker, Bridget currently resides in Long Island, NY. Outside of work, she enjoys Broadway shows, boating, and traveling with her family.